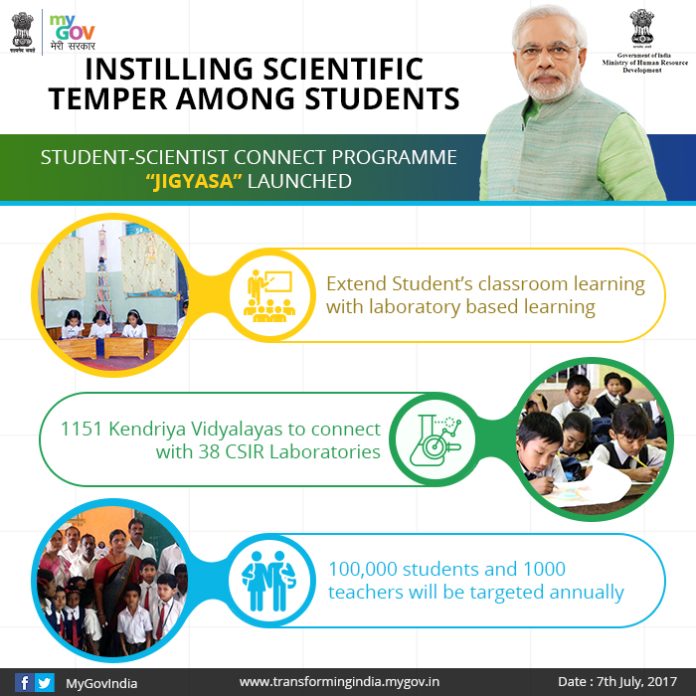 Dr Jitendra Singh urged the CSIR Jigyasa team to continue to mentor the students so that they will lay strong foundations for the Roadmap 2047 and help India solve the various challenges and make it a global leader. He said, it is critical to engage the future generation of scientists and technologists and highlight the science, technology & innovation from every part of our country.

Dr Jitendra Singh expressed satisfaction that CSIR Jigyasa Vigyan Mahotsav 2022, launched on 3rd January 2022, had reached out to more than 20,000 students through Bootcamps across the country. He said, 7 Bootcamps with futuristic themes in areas like Energy, Health, Artificial Intelligence, Climate Change, Water Conservation, Disaster Mitigation and Agro-technology were organised where in science experts could communicate to students some of the contemporary issues that are facing us and which need greater awareness and S&T based solutions.

CSIR has got various artists, animators, app developers etc and organized bootcamps on developing contents like comics, science fictions, videos, infographics, App development, animations etc, said the Minister. These bootcamps provided an opportunity to the students to understand the scientific concepts and stimulate their thinking and approach, he added.

Dr Jitendra Singh said, CSIR Virtual Lab has been the next logical step in inculcating scientific temper, and that was also a direction by the Prime Minister of India in CSIR Society meeting held on 14th February 2020 to take science further to all segments of the students in every corner of the country. Recollecting the launch of the CSIR Virtual Lab platform on 22nd November 2021, and also interacting with some of the school students who have benefitted from the Jigayasa program, the Minister said, the CSIR Virtual Lab platform developed along with IIT Bombay is proving very useful for the students to engage in scientific concepts in a fun and creative manner.

Dr Jitendra Singh said that CSIR Jigyasa has emerged as a flagship outreach program of CSIR with a large connects to the school students across India. He said, not only have the students physically visited CSIR labs and interacted with the students, even during the pandemic, students could connect to scientists and engage scientifically through webinars. The Minister was happy to note that CSIR Jigyasa programme being implemented from 2017 have benefitted more than 4 lakh students across the country.

Dr Jitendra Singh said, the combination of science, creativity and ideas is a step towards the future vision of the country as we plan ahead for 2047. He lauded the role of CSIR for engaging and providing some insights into developing creative content based on scientific concepts. The Minister also promised that the content developed by students will also be showcased on the CSIR Jigyasa virtual platform and other social media platforms to motivate other students.

Dr Jitendra Singh informed that this week starting from 22nd February 2022 to February 28th is being celebrated as the Iconic week of Science and Technology ministry under the Azadi Ka Amrit Mahostav. All the science departments are actively engaged in this. Jigyasa Vigyan Mahostav is also a part of this celebration.

Dr Jitendra Singh gave away the Grand Prize of Rs One Lakh each to three students Mohammed Hisam, Shruti Nimbali and Sanchi Bansal for the CSIR’s National Level Scientific Creativity Competition conducted in Hindi and English Medium. 75 winners from all the country were chosen for the awards as part of celebration of India’s 75 years of Independence. The children have been evaluated rigorously for their creativity; innovative ideas; story telling ability; message conveyed; overall aesthetics; out of box thinking; usability or applicability in case of apps/ videos/ animations.