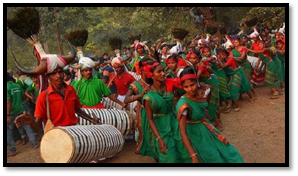 The celebrations of the First Day of the auspicious and much-awaited biennial “Medaram Jathara” commenced on the 16th of February 2022 as the arrival of Saralamma on to the ‘Medaram Gaddhe’ (Platform) was undertaken by the Koya Tribe of Telangana.

Medaram Jatara is the second-largest fair of India, after the Kumbh Mela, celebrated by the second-largest Tribal Community of Telangana- the Koya tribe for four days. As the largest tribal fair in Asia, Medaram Jathara is conducted in honour of the Goddesses Sammakka and Saralamma. It is celebrated once in two years in the month of ‘Magha’ (February) on the full moon day. Saralamma was the daughter of Sammakka. Her idol, according to the rituals, is installed in a temple at Kannepalli, a small village near Medaram.

In the early hours of the day, Pujaris (Priests) performed sacred pujas . The traditional Koya priests (Kaka Vaddes) bring, on the first day, the insignia (Aderalu / Sacred pots and Bandaru / Mix of turmeric and saffron powders) of the goddess Saralamma from Kannepally and place on her Gadde (platform) in Medaram, amidst their traditional musical beats (Doli / cylindrical drum, Akkum / brass blowing instrument, Thootha Kommu / bison-horn blowing instrument, cymbals, etc.) and dances with huge processions/prostrations of the pilgrims seeking boons for children, etc.

Similarly, on the same day by evening the insignia of Sammakka’s husband Pagididda Raju – flag, Aderalu and Bandaru – is brought by Penka Vaddes from Punugondla village, Kothaguda Mandal, Mahbubabad district to Medaram. Likewise, the insignia of the deities of Govindaraju, brother-in-law of Sammakka and Nagulamma, sister of Sammakka are also brought by Dubbagatta Vaddes from the village Kondayi, Eturunagaram Mandal, Jayashankar Bhupalpally district to Medaram.