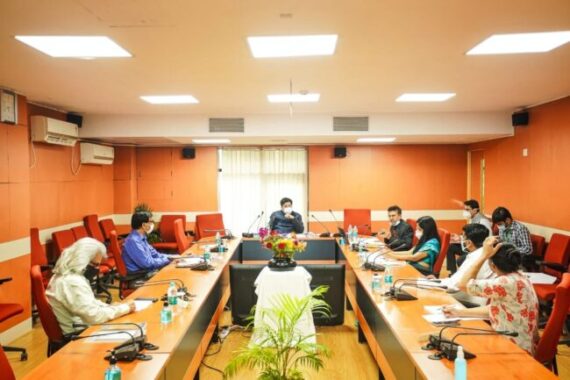 Union Minister for Commerce & Industry, Textiles, Consumer Affairs and Public Distribution, Shri Piyush Goyal chaired a meeting with Designers, which  brainstormed ideas on making India the fashion capital of the world and empowering our country’s artisans & weavers, who are the true flag bearers of our culture & craft heritage.  U.P. Singh Secretary, Ministry of Textiles and Shri. Shantmanu, Director General of NIFT were also present.

The purpose of the meeting was to discuss the collaboration of designer’s crafts people and how interventions of technology & marketing strategies can increase the scalability of the craft. Protection of craft and craft people, sustenance of craft were some of the views put forth by the designers. Craft should be given the status of luxury as it is labour of love.

Shri Goyal  appreciated the designers for their point of view as well their passion for Indian Crafts. He emphasized that art, craft, culture, tradition and heritage of a nation is to be respected. He assured the designers that all the points raised or discussed are well noted and will be taken into account in the way forward. The idea of wearing khadi/ handloom one day a week and the sense of designers having pride in the nation was appreciated. “It opens up a lot of possibilities and that the designers have a huge role to play”, he said.

The Minister urged the designers to work in synergy towards one goal of  ensuring that each of the 75 lakhs identified craft people earns Rs.1000/- more every month. He said next is identification and protection of India’s craft and heritage. The Minister also called upon the entire ecosystem of NIFT with over 30000 alumni to  get together to bring in a change in the craft ecosystem.  Each alumnus’s should adopt a craft person and devote time to educate the non-privileged section of the society on various aspects of design, management and technology, he added.

Shri Goyal  also stated that India should ultimately become the fashion capital of the world. India should mark its presence globally by having its products displayed alongside the prominent fashion houses of the world.  He said, “Taking pride is important and without prejudice one needs to take the ideas forward for the sake of the progress of the nation. Collaboration is the key point