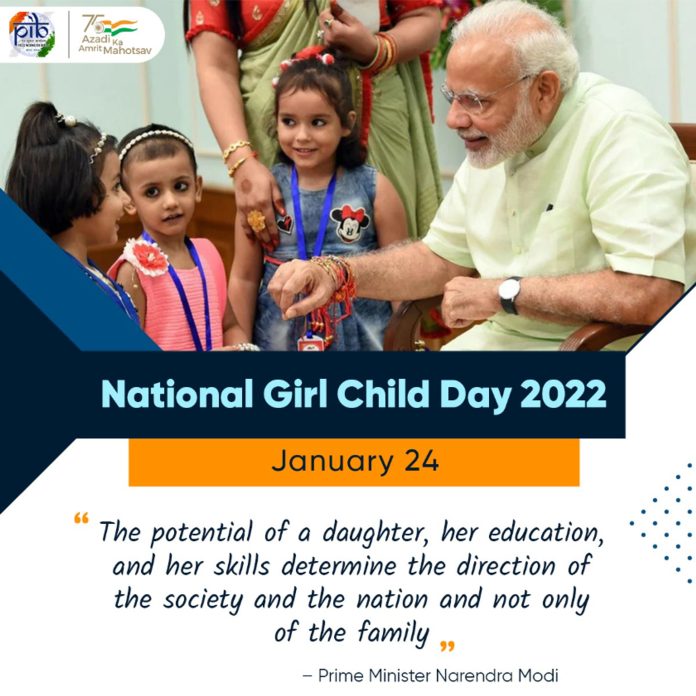 National Girl Child Day is celebrated in the country on January 24 every year with an objective to provide support and opportunities to the girls of India. It aims towards promoting awareness about the rights of the girl child and to increase awareness on the importance of girl education, and their health and nutrition and also to promote the girls position in the society to make their living better among the society. Gender discrimination is a major problem that girls or women face throughout their life. National Girl Child Day was first initiated in 2008 by the Ministry of Women and Child Development.

The objective of National Girl Child Day is to create awareness about the rights a girl owns and to give girls the opportunities like everyone else, also to support the girl child of the nation and remove gender-based biases. Another objective of celebrating this day is to promote awareness about the inequalities that a girl child faces and educate people about girl’s education. Basically to value them and to respect them like everybody else and give a new perspective towards girl child and to decrease discrimination. The main focus is on changing society’s attitude towards girls, decrease female feticide and create awareness about the decreasing sex ratio.

Steps Taken by the Government

Government of India has taken several steps over the years to improve the conditions of girls. Government has started several campaigns and programmes some of them are :

g. National Scheme of Incentive to Girls for Secondary Education

Census 2011 data was a call for urgent action, because it highlighted that the girl child is increasingly being excluded from life itself. The unabated decline in Child Sex Ratio (CSR) since 1961 (from 976 in 1961 to 927 in 2001 and 918 in 2011) was   a matter of grave concern as it reflected the low status of women in our society and indicates her disempowerment over a life-cycle continuum. Declining CSR is also indicative of pre-birth discrimination manifested through gender biased sex selection and post birth discrimination against girls (in terms of health care, nutrition and educational opportunities).

CSR continued declining in spite of a strong legal and policy framework and various Government initiatives. The sharp decline is associated with an intersection of various factors such as the increasing spread and misuse of technology for prenatal sex selective elimination, changing aspirations of urban and rural societies, changes in family structures and reproductive decision making, favoring a smaller family size. This has accentuated the son preference, associated with the low status of women in society, patriarchal social norms and the disturbing pattern of gender based violence faced by girls and women across the life cycle.

Despite various policy and programmatic provisions, addressing adverse and steeply declining CSR remains a critical challenge. Efforts are needed to ensure survival, protection and education of girl child to help realize her full potential. In this   regard, the Hon’ble President of India, in his address to the Joint Session of the Parliament on June 9, 2014 had stated that “With a commitment of “Beti Bachao Beti Padhao”, my government will launch a mass campaign for saving the girl child and enabling her education. Further the Finance Minister in Budget speech 2014-15 also reiterated Government of India’s commitment by setting aside Rs. 100 Cr. Hon’ble Prime Minister expressed deep concern over the decline in CSR in his Independence Day address.

In this background, Beti Bachao Beti Padhao (BBBP) Scheme was launched by the Hon’ble Prime Minister on 22nd January, 2015 in Panipat, Haryana to address the issue   of decline in CSR and related issues of empowerment of girls and women over a life cycle continuum.

The Overall Goal of the Beti Bachao Beti Padhao (BBBP) Scheme is to celebrate the girl child, enable her education.

The Scheme is being implemented with a goal to celebrate the girl child and   enable her education. The objectives of the Scheme are as under:

Scheme has stirred up collective consciousness towards changing the mindset of the public to acknowledge the rights of the girl child. The scheme has resulted in increased awareness and sensitization of the masses. It has raised concerns around the issue of declining CSR in India. As a result of collective consciousness of the people supporting the campaign BBBP has found its place in public discourse.

In view of COVID 19 situation in the country, it has been decided that all programs should be organised on virtual/ online mode and all kinds of physical interactions should be avoided.

On the occasion of National Girl Child Day on 24th January and as part of Azadi Ka Amrit Mahotsav, a virtual function would be held to recognise the exemplary achievements of children by facilitating PMRBP awardees of 2022. Hon’ble Prime Minister would interact virtually with winners of PMRBP-2022.  The children along with their parents and concerned District Magistrate of their respective district would join the event from their district Head Quarters.